Title: All According to Plan
Pairing: Cara/Kahlan
Rating: R
Warnings: rada'hans and agiels
Summary: Kahlan knows her target. But she has something - someone - else on her mind. - Futurefic.

Author: GREATSHOW
Title: CARA AND KAHLAN: SWITCHED IN LOVE, CHAPTER 3
Pairing or characters: Cara/Kahlan. Various other characters, canon and non-canon.
Word count: 5721 (give or take a few with tweaks)
Warnings/Rating: Usually rated teen (14 and up). Other times rated R or NC-17.
Disclaimer: These characters are the property of Disney and Terry Goodkind (the main characters, that is) .
Author's notes: This is my first story composed of "chapters." The time period is 1066. Our 1066, not any time period that may belong to the books or the television series. In this setting, the Midlands and D'Hara are medieval kingdoms (known as England in modern times). Update note: I had most of this chapter written since 2014 and 2015, but my laziness and lack of enthusiam kept me from updating. Today, though, while watching some Cara clips on YouTube, I decided, "Let me go ahead and update this story."
Summary: The Lord: Lady Cara Mason would have never predicted that her hot-headed twin brother would be so selfish as to put her in this position — to where she must not only assume his identity but his marriage as well — but, alas, here she is. Looking every bit the part and awaiting his bride. All of this while he attends to "urgent matters." All of this to save their lands. Cara only hopes that it's worth it. She hasn't had much "experience" with women, though she has "dabbled," and is quite sure that she would have been better off had a certain male appendage been appointed her life-mate than the woman she will soon meet.
The Lady: If there's one thing Lady Kahlan Amnell knows, it's that she's not attracted to men. Not sexually. Not generally. So it is not in any way forgivable that her father, Wyborn, King of the Midlands, guilt-trips her into marrying none other than the enemy, Cal, Earl of D'Hara, to unite their feuding kingdoms and to hopefully defeat the invading Normans. But as Kahlan makes an attempt to find some common ground with "Cal," it may be commonalities with Cara she finds instead.

Chapter 1 (if you need to start from the beginning, need to catch up, or just refresh your memory). Read Chapter 3 here.

This story (the censored version, when it comes to a few words and later regarding sexual aspects) is also available at Fanfiction.net 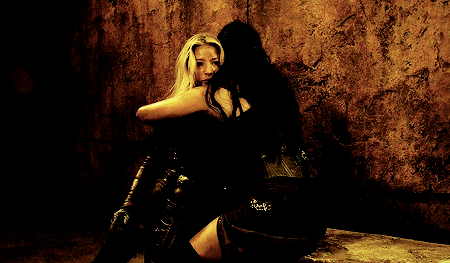 Title: Live Past Destruction
Rating: PG-13
Pairing: Cara/Kahlan
Summary: Kahlan travels with the woman who killed her sister.
A/N: Ties in to Broken, Touched, and Resurrection, sliding towards AU.

...that may or may not include clothes...

Do you miss Legend of the Seeker? Have you missed the characters individually, as a group, in old and new adventure? Have you wanted to write a fic or create graphics but don't get the chance anymore? Are you looking for an excuse to rewatch the show? Well... here's a chance:

legendland FOR THE FINAL ROUND!
PREVIOUS OR NEW MEMBERS, WE WANT YOU ALL!
Team Mord'Sith and Seeker are in most need for members.
*queue epic music*

This is going to be the final round for the landcomm. *swallows sob* We don't care if you're new to the fandom, you've flailed since the 'Prophecy' aired. The New World and

Note the date, the final battle is about to begin...

I had not seen this here, so Tabrett won the best actress award for her role in Oren!

Hooray! Congrats to our beloved Tabrett!

( You are about to view content that may only be appropriate for adults. )

Title: Basket...now what do you have inside??
Fandom: Legend of the Seeker
Characters: Richard, Kahlan, Cara, Zedd
Rating: PG
Summary: A suspicious looking basket lay in his hand, wondering if these pomegranates was the source of the secret Zedd had kept from him. Yet Richard would have to be patient to find Zedd trying hard to save a soul.

Check it out here... http://spiritcoda.livejournal.com/92148.html 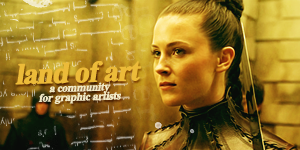 hey my lovely graphic artists!
My name is Christina and let me tell you,
if you are part of

landofart
you will have so much more fun doing graphics!

so be nice and join NOW!
and pretty please tell them christinaa88 sent you :)